Getting the right people on your sales bus 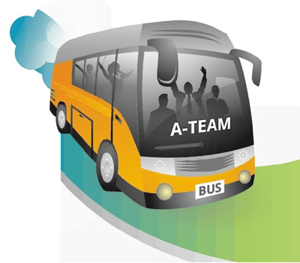 In his widely acclaimed Good to Great, Jim Collins shows that lastingly great organisations pay particular attention to not only getting the “right people on the bus”, but also making sure they are in the right seats (= roles) - as well as taking proactive action to get the wrong people off the bus.

This principle - relevant right the way across every organisation - is particularly critical when it comes to the sales function. Sales leaders simply cannot afford to recruit the wrong people, to put people into roles that fail to align with their talents, or to retain people who are either never likely to perform or who might only achieve their goals at the cost of compromising the culture of the organisation.

The potential cost of failure is amplified in any sales role. It’s not just about the cost of hiring or the subsequent wasted renumeration - far more significant is the opportunity cost associated with lost revenue, missed targets, unhappy customers and tarnished reputation.

CVs and claims of past performance are often deceptive. Hiring on the basis of past experience alone rarely guarantees future success. Even inept salespeople can come across well at interview. What can sales leaders do to ensure they end up with a bus full of positive role models?

The most important thing to acknowledge is that the recruitment and subsequent management of salespeople cannot be treated as an interview-driven art form. It requires evidence and science as well. For some organisations, this involves putting potential employees through generic psychographic profiling tests - the same tests they use for recruits and employees across a variety of different roles.

But the problem with these generic psychographic tests is that they typically fail to focus on the specific attitudes, attributes and behaviours that have been proven to underpin sales success. Research has identified 21 separate critical sales competencies - you can read more about them here.

The relative importance of these competencies will inevitably vary between sales roles (for example between an installed base salesperson, a new business salesperson, a first line sales manager and a channel manager) but - as you might expect - they include the ability to:

Few, if any, of these attributes would be accurately revealed using generic psychographic tests. But there’s more: in addition to the predictable factors above, it turns out that the following capabilities also have a significant impact on sales success:

And there’s more - you can review all 21 factors here.

You can't afford to leave hiring decisions to chance

It’s always puzzled me why so many sales organisations leave recruitment decisions to chance and persist with under-using the talents of their existing salespeople by leaving them in less-than-optimal roles.

The science is established, the evidence exists, and the proofs are impressive: according to the widely acknowledged global industry leaders in sales assessments and evaluations Objective Management Group, with nearly 2,000,000 completed sales evaluations:

In something as complex as a hiring decision, it’s hard to make consistently perfect decisions. But I think you’ll agree that these sorts of statistics demonstrate that a science-led, evidence-based approach can dramatically improve your chances of building a successful sales organisation.

And whilst my emphasis to date has been on getting the right people on your sales bus in the first place, it should be obvious that using structured evaluations of your existing sales organisation can ensure that you’ve got the right people in the right seats - roles that reflect their specific blend of talents, as well as uncovering the reasons behind troublesome performance.

Structured assessments can highlight the areas where talented-but-underperforming salespeople would benefit most strongly from coaching and targeted skills development, as well as helping them become aware of their own strengths and weaknesses.

And they can help to offer a rational explanation to the feeling that certain salespeople, no matter what they do, may never become successful or “fit in” to the culture you are determined to establish.

What have you got to lose?

All in all, I can’t think of a single good reason not to invest in evaluating your existing sales organisation - managers as well as salespeople, unless you’re concerned about what you might learn and not confident that you will be willing to act upon the lessons learned.

But if you’re concerned about uncovering and confronting the realities, maybe you should be worried about your long-term tenure as a sales leader…

If you’re interested in learning more about the science behind the statistics, I strongly recommend that you sign up for this webinar - and if you’d like to explore any of the issues raised in this article, please book a time to call.