Why your pipeline doesn’t need any sales stages 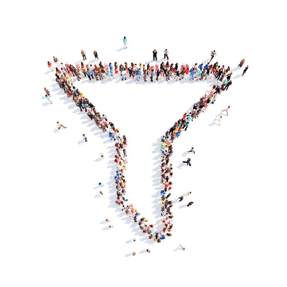 This is a subject I’ve referred to before, but an excellent article by Don Mulhern has prompted me to promote a concept that deserves far more attention - and which is driving impressive success in the growing number of sales organisations that have embraced the idea.

Most CRM systems - and most sales methodologies - are based on the idea of the pipeline reflecting a series of sales stages which are assumed to be progressively completed over time. It is also assumed that the further we have progressed through these sales stages, the more likely an opportunity is to close.

Many systems go even further: applying the same default probability to every deal that has reached a certain stage. Even worse, many CRM implementations take the “out of the box” default percentages without ever giving any thought to their accuracy or relevance.

But complex B2B sales are - unsurprisingly - far more complicated than that, and it’s yet another example of how simplistic, statistically derived assumptions that can be made to work in straightforward transactional sales environments don’t apply anything like as effectively to complex buying decisions.

I’ve seen ludicrous examples in which the delivery of a proposal is automatically associated with a 50% probability - despite the fact that at least three vendors are bidding (probably making similar unrealistic assumptions about probability), and without regard to the very real possibility that the customer will decide to stay with their current situation or defer the decision.

Why your sums don't add up

Even a child can see that the math doesn’t work - and that’s without taking into account the inevitable fact that the vendors and their associated bids are invariably not equal in the eyes of the prospect. It’s a recipe for catastrophically inaccurate sales forecasting.

So - what can we do about this? Well, at minimum, we need to break the link between sales stage and probability and replace it with a mechanism that reflects the specific characteristics of every individual opportunity. For example, we might choose to:

Even if some of these specific examples do not have predictive value in your sales environment, it would be astonishing if there were not other factors that had a significant impact on your chances of winning.

But even that approach - relating deal probability to the completion of critical success factors rather than only to sales stage is still something of a kludge. And that’s why I claim that your pipeline doesn’t need (and shouldn’t use) sales stages.

Sales stage thinking is a discredited metaphor. It assumes linearity, and it fails to recognise the complex and essentially unpredictable nature of our prospective customer’s buying process. Like Monty Python's parrot, if its feet had not been nailed to the perch by the CRM vendors we would have recognised that it was dead long ago.

Our customer's buying process is almost inevitably non-linear (and often not very well understood by our potential champion). At any point, our prospect can decide to move forwards, to revert to a previous phase, to say as they are, or to abandon the decision journey altogether and stick with the status quo.

It is critically important that we are aware of where they are in their decision-making journey, and that we use this information to guide our actions and assess our chances of winning.

Whilst the process is often non-linear, at any particular point in time the centre of gravity of their decision process is almost always in one of the following phases:

It is normally possible to make an informed assessment of where our customer is in their journey. And instead of thinking only about our sales actions, we can usually identify a handful of things that we need to know or do at each stage to assess the likelihood they will act, to facilitate their buying decision, to positively position our approach against their other options, or to qualify them out because they are unlikely to do business with us.

A simple combination of an accurate assessment of their current buying stage plus a handful of key success factors along the lines outlined above can help us to make a much better informed judgement about whether they are likely to buy, whether we are likely to win, how much the deal could be worth, when a formal order can be expected, and whether all the effort required is likely to be worth it.

All of the available research - from CSO Insights and others - suggests that sales pipeline management and sales forecast accuracy remain at acceptably inaccurate levels. There are some obvious remedies - including the ones I have highlighted above. So - you have to wonder - why do so many sales organisations still base their pipeline around sales stages?

Bob Apollo is a Fellow of the Association of Professional Sales, an award-winning blogger, a confident and entertaining event speaker and workshop leader, a regular contributor to the International Journal of Sales Transformation and the founder of UK-based Inflexion-Point Strategy Partners, the B2B value-selling experts.

Following a varied and successful career spanning start-ups, scale-ups and corporates Bob now works as an adviser to some of today’s most ambitious B2B-focused sales organisations, equipping and enabling them to accelerate revenue growth and transform sales effectiveness by implementing the proven principles of value-based selling.