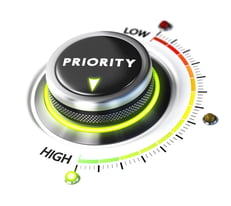 Having a clearly defined and actively worked new business target account list is a key strategy for anyone who is responsible for proactively developing their own territory (or who has BDR resources focused on their behalf).

Generally, having a small actively worked new business target list is better than a large one that rarely receives the necessary attention. But in today’s climate, it’s important to understand which of your long-term targets has short-term potential.

Your short-term potential is likely to come from your ability to address their short-term important priorities in a way that can deliver provably superior outcomes compared to any other credible option that might be available to them.

That’s why B2B salespeople need to systematically reassess and reprioritise their existing target account lists in a way that allows them to focus their energies where they can make the biggest impact. Here’s how...

I want to suggest some of the key considerations to be applied when it comes to creating and prioritising a target account list to reflect the current business realities.

Any effective target account list must be based on set of “ideal customer” characteristics. These are the factors that determine whether an organisation has the potential to become a strategic, profitable long-term customer. Some of your existing criteria may need revisiting - for example if the industries you had previously been focusing on have been disproportionately affected.

First you need to be crystal clear about the high-priority current business issues - both threats and opportunities - you are in a better position to address than any other widely available option, and you need to understand the typical symptoms, the customer’s likely obstacles and the consequences of failing to address them.

Then, you need to identify the common characteristics of the organisations that are most likely to suffer from these high-priority issues.

This is where traditional segmentation often starts and finishes. Demographic factors are typically size, sector and location-based. All these can establish, however, are the outer boundaries of your potential markets. They have never been particularly effective at determining which organisations are most likely to do business with you and are even less effective now.

These include rather more reliable indicators such as the way in which the company is organised, their go-to-market model, their existing systems, vendor relationships and infrastructure, their market focus and position, and so on. These are typically much better predictors of your chances of doing business with them in the long term.

These include some harder-to-determine but nevertheless highly important characteristics such as their appetite for innovation, their willingness to do business with best-of-breed vendors, the way they make decisions, the nature of their relationship with suppliers, and so on.

Demographic factors can often be determined through some fairly basic desk research, but the other factors require deeper investigation. Taken together, the above three factors indicate your long-term chances of doing business with any particular organisation - but they don’t say very much about your short-term opportunities.

You then need to identify the roles in these organisations who are most likely to have the responsibility for finding and implementing successful solutions to the identified high-priority issues. These may carry a number of different job titles, but the common thread is the idea that they are responsible for dealing with the problem - typically by mobilising their colleagues and coordinating a response with a number of different internal stakeholders.

Whilst these may not always be C-Level roles, they will usually be held accountable by C-Level executives for achieving the desired outcomes. Organisation chart position is often less important than the respect and authority they command within their organisation.

The above three factors strongly influence your chances of doing business with a targeted account in the long term, but the fourth factor - the presence of a trigger event - that has the strongest influence on the possibility that you may be able to do business in the short term.

These often include new senior appointments, new strategies, new initiatives, new investments, failed existing projects and so on. The common consequence is that they help the customer to recognise that perpetuating the past and sticking with the status quo is unlikely to be a winning strategy.

These often include new legislation or regulation, new competitors, new technologies, one-off events and so on. Covid-19 is probably the single most profound external event that most organisations are having to deal with, as it will inevitably create both new threats and new opportunities as the norms of successful business in the customer’s sector are redefined.

The third form of trigger event are long-term, profound evolutionary changes in the organisation’s business landscape whose impact can no longer be ignored or avoided - a tipping point has been reached which now makes action both important and urgent.

Salespeople need to review membership of their target account lists against the above criteria, together with an evaluation of their current presence in the account. Some existing target accounts may end up being removed from the list - other new target accounts may be added, but the new list needs to reflect the realistic potential for doing business with each of the targeted organisations in the current and foreseeable future business climate.

Even if there appears to be short-term potential, salespeople need to be careful to focus their energies on “sweet-spot” projects. These are projects where the issue being addressed is important and urgent enough to justify short-term action, but where the project is of a modest enough size to allow rapid decision-making and implementation.

A particularly useful indicator is when the customer acknowledges a high priority “trying but failing” project which is not generating the expected results, and where faith in the current approach has eroded. Assuming we can navigate the sometimes-complex egos and politics associated with re-opening the initial decision, if we can offer a proven remedy the customer will often be willing to act swiftly.

Whilst you will probably want to continue to nurture the projects you are already involved in, this is not the time to seek out or prioritise new strategic long-term projects that even in easier times would have involved a complex and lengthy decision-making process. Far better, where possible, to find a manageable urgent project, close and implement it quickly, prove the results that have been generated, and pursue a land-and-expand strategy.

You should choose the number of accounts that will allow a salesperson to maintain active contact. Let’s say that ~20 is a manageable number. That list of accounts, once initially verified, needs to be managed as two tiers.

The top tier of around ~10 organisations represents the organisations where you have the best chance of doing short-term business - either because they have a current project, or they are likely to be suffering high-priority business issues that will cause them to take action. These will be the most actively managed accounts.

The lower tier of the remaining ~10 accounts represents organisations who - even if they do not appear to have a current project or high-priority issue - nevertheless represent good long-term potential for your offerings. These still need to be actively nurtured but require less day-to-day attention than the top tier accounts.

Targeting sales resources on the most promising areas of opportunity has always been a good strategy. It is even more important now. But even if you have historically had a disciplined approach to targeting accounts, it’s probably a good idea to review the assumptions on which those accounts were identified, and to adopt a more agile approach to managing the list.

If you’d like more information about any of the targeting tools referred to in this article, let’s find a time to talk!

An earlier version of this article was published on LinkedIn.