Aligning our sales process with our prospect’s buying journeys 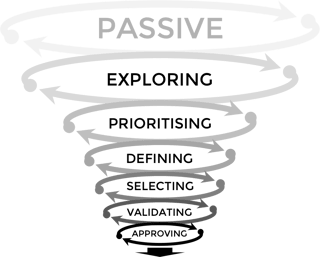 In complex sales environments, the role of the successful salesperson isn’t just about prospecting, qualifying and closing. In fact, the most effective sales people are the ones who manage to successfully facilitate complex buying decision processes that involve multiple stakeholders.

And yet the sales pipeline stages in the majority of CRM implementations are still defined with reference to the completion of a linear sequence of sales activities such as “qualifying”, “demonstrating” and “proposing” that usually bear little relationship to the true state of the prospect’s often-complex buying journey, or the likelihood they will either do anything or choose your solution.

It’s no wonder that so many sales pipeline valuations are wildly optimistic, or that sales forecasts often remain stubbornly inaccurate, with “current quarter commit” deals that turn out to be nothing of the sort. If you recognise, or even suspect that you have a problem in these areas, it’s time to take action.

We might point the finger of blame at the CRM providers, who often use default pipeline stages such as “qualified”, “demonstration” and “proposal” that in the absence of adequate context have little or no bearing on where the prospect actually is in their process.

We can try tinkering with stage labels and definitions, but the problem is going to persist for as long as we continue to base our sales pipeline stages on a series of defined sales activities and milestones.

I’m not the first to come to this conclusion: for years, SiriusDecisions and others like the folks at align.me have promoted the idea of aligning the sales process with the buyer’s journey. It’s an idea that is long overdue widespread adoption, particularly for complex B2B sales that involve multiple stakeholders and often reflect complex internal political considerations.

With the help of a growing number of clients, I’ve spent the past few years testing and tuning a framework that seems to reflect the significant phases and events in a typical successful B2B buying journey.

I’ll be the first to acknowledge that it does not offer a “one size fits all” approach - it often needs to be adapted to reflect the particular nuances of the buying decision process in specific markets. But I’d like to share it with you in the hope that it might help you to think about how buying decisions are made in the markets you serve.

It by no means reflects how every individual buying process pans out in practice, either. Many prospects appear to rush past the “prioritising” phase, for example - but this typically stores up trouble later along the line, and many of these projects end with the prospect deciding to stick with the status quo - a decision that could have been predicted far earlier in the cycle if we had only been aware that the case for change was weak.

In addition to embracing buying-decision phases as the basis for defining our sales pipeline stages, the other decision we need to make is to assess where the prospect’s decision team as a whole is in their buying journey, rather than basing our judgement on one perhaps over-enthusiastic champion who may have failed to bring the colleagues with them.

So let’s step through these buying-journey-aligned phases one-by-one:

Most long-term potential customers for most vendors are in this phase most of the time. Whilst key individuals are passively absorbing information that is relevant to their role and organisation, they appear to be currently satisfied with their current situation and are not actively in the market for new solutions.

But then something happens - an internal or external trigger event or stimulus - to draw the prospect’s attention to an issue that we have chosen to target, and they slip into a more active mode of investigation, during which they may be prepared to reveal themselves to potential solution providers by downloading materials, registering for events, etc.

Our role as a vendor during this phase is to identify our most valuable prospects, educate them on the issues we have chosen to target, and persuade them to want to engage with us. The earlier we can persuade them to engage, the better.

SiriusDecisions refer to this phase as the “Loosening of the Status Quo”. Something has happened to draw our prospect’s attention to a potentially important or critical business issue, and they have decided to investigate. They might not yet be prepared to interact directly with a sales person (in fact they might need to be persuaded to do so) but they are at least prepared to start exploring the issue and researching their potential options.

Depending on what they learn during this phase about the issue, its impact and how they might be able to deal with it, they may - usually collectively with one or more colleagues - come to the conclusion that the problem or opportunity merits serious investigation.

Our role as a vendor during this phase is to continue to educate them, to reveal some previously unconsidered issues or implications that could persuade them to engage in a properly substantive conversation with us sooner rather than later, and to start to assess whether our current primary contact is capable of mobilising their colleagues to recognise the need for change.

SiriusDecisions refer to this phase as “Committing to Change”, but it’s a phase that is sometimes skipped or given insufficient consideration, to the potential detriment of the subsequent evolution of the project. Most stakeholders, and most organisations, have many more potential issues and projects on their radar than they can possibly hope to deal with. The most effective way of prioritising them is to consider the cost of inaction: what would happen if they simply decided to stick with the status quo.

It turns out that if this “cost of inaction” isn’t properly considered at an early stage - and if the project isn’t even roughly stack-ranked against other competing demands on resources - a number of poorly qualified projects will make it through to subsequent stages even though the chances are the project will ultimately fail to be signed-off.

Our role as a vendor during this phase is to encourage the prospect to properly consider the costs, consequences and implications of failing to address the issue, to identify the key stakeholders that are most likely to form the decision team and if there isn’t an obvious consensus around the need for change, to thoughtfully evaluate whether the project is worth applying further sales resources to.

SiriusDecisions refer to this phase as “Exploring Possible Options”. The prospect has decided (in principle at least) that they probably need to take action, and is in the process of defining their requirements, researching potential solutions in greater detail, and agreeing who should be involved in the decision and what the decision criteria and process should be.

In complex B2B decisions, the CEB found that an average of 6-7 stakeholders will be involved in the process - often more if the situation or the internal politics are particularly complicated. This is a pivotal phase in the decision process - research by Forrester concluded that nearly three-quarters of buying decisions ultimately went to the vendor that first helped to shape the prospect’s buying vision.

Our role as a vendor during this phase is to do precisely that - to do all that we can to influence and shape the decision team’s vision of a solution. If we arrive late to the party - for example, if the first we hear of a project is when we are invited to respond to an already-defined RFP - our chances of influencing the outcome are slim.

SiriusDecisions refer to this phase as “Committing to a Solution”. The decision team is actively evaluating a set of shortlisted vendors (as well as, in some situations, a “do it ourselves” option) against a set of defined criteria and trying to achieve consensus around their preferred option or options. They are also - typically - seeking to reconfirm the need for action.

Getting all the stakeholders aligned can be challenging. Each will often have their own sense of priorities and their own vendor favourites, and may also be championing other projects that could end up competing for resources.

Our role as a vendor during this phase is to persuade the decision team that our approach is superior to all the other options that are open to them (including the possibility that they may decide to “do nothing”), and to do what we can to facilitate their decision process.

SiriusDecisions refer to this phase as “Justifying the Decision”. The decision team has identified their preferred option (or sometimes, have brought the choice down to one of two finalists). They are now trying to ensure that they de-risk the decision and prepare the strongest possible internal business case.

This typically involves completing both vendor and solution due diligence through reference checks, etc., negotiating the best possible contractual and commercial terms and preparing the project justification for final approval.

Our role as a vendor during this phase is to do all that we can to mitigate or eliminate any remaining perceptions of vendor or solution risk, to negotiate “win-win” terms, and to help the decision team to prepare the best possible internal justification.

SiriusDecisions refer to this final phase as “Making the Selection”. Our prospect is submitting their internal business case and project justification for final formal approval. The level of scrutiny involved in securing this approval is typically related to the level of investment required.

Our competition in this final stage is no longer another competitive vendor: it typically comes from other projects that are competing for the available funds, and may also reflect internal politics within the final approval body. Simply having been selected and validated is no guarantee that we will pass this final hurdle.

Our role as a vendor during this phase must therefore be to do all that we can to support our prime sponsors and their colleagues on the decision team in establishing the best possible justification, to be aware of the political climate, and to do all that we can to equip our prime sponsors to anticipate, pre-empt and address the questions that may arise during the approval process.

It should be obvious, but it’s worth stating: the prospect’s buying process can move backwards as well as forwards, and it’s down to us to be aware of this and to look out for the signals.

I hope that you can see how our perspective inevitably changes when we think of our pipeline stages as phases in our prospect’s decision-making journey, and when we base our judgement on where the decision team has reached rather than a single possibly over-enthusiastic champion.

But what you may not be able to see from the above is the difference that this can make to the accuracy with which we can manage our pipeline and generate reliable revenue forecasts. There’s a simple way of proving it - try implementing this approach for yourself. I’m confident that you’ll be more than impressed with the outcomes.

A fellow of Association of Professional Sales, Bob Apollo is the founder of UK-based Inflexion-Point Strategy Partners. He applies proven principles to help high-potential B2B sales organisations systematically transform their sales performance. Follow him on Twitter at @bobapollo.

An earlier version of this article was published on CustomerThink.