The Challenge with Challenger Selling 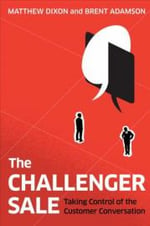 “The Challenger Sale” by Matthew Dixon and Brent Adamson has been one of the most talked-about sales books of the past decade - and has been described by no less an authority than SPIN-Selling author Neil Rackham as “the most important advance in selling for many years”.

Based on an impressive body of research, the book sets out an attractive and seductive formula for achieving sales success - and it’s attracted the attention of a significant number of CEOs who are looking for a way to differentiate their organisation from the competition and accelerate revenue growth.

But as many have discovered, adopting Challenger is neither a miracle cure nor a sure-fire recipe for success. In a number of instances, Challenger Selling has transformed sales performance - but in others, it has failed to achieve the hoped-for results. How can these differences be explained?

The first thing to make clear is that you can’t hope to successfully implement any sales methodology by simply sending people on a training course or (even worse) giving them a book to read, but this is particularly true for Challenger. It requires the full commitment of both sales and marketing if it is to succeed.

THE ESSENCE OF CHALLENGER SELLING

Here’s what the authors have to say: “Instead of bludgeoning customers with endless facts and features about their company and products, Challenger sales people are supposed to approach customers with unique insights about how they can make or save money, and then tailor their sales message to the customer’s specific needs and objectives.”

They go on: “Rather than acquiescing to the customer’s every demand or objection, they are assertive, pushing back when necessary and taking control of the sale”. This mantra is often summarised as teach > tailor > take control. Finally, they confront the traditional idea that sales is primarily about relationships - and conclude that “the best sales people don’t just build relationships with customers - they challenge them”.

Unfortunately, a number of naïve and simplistic summaries of the book have concluded that relationships don’t matter in selling (they do!), and that because the average prospect is 57% through their buying cycle before they want to engage a sales person, that we should not try to get involved any earlier (we must!).

But even for the organisations that have guzzled the Challenger Selling Kool-Aid and avoided these dangerous misinterpretations, there are still a number - maybe even a majority - of Challenger Sales projects that haven’t come close to achieving their potential. Here are a few of the most common reasons…

WHAT IF MARKETING ISN’T UP TO THE TASK?

One of the most common reasons for failure is that marketing isn’t up to the task: it remains fixated on traditional feature-function-benefit product marketing and simply isn’t close enough to either their customers or the sales people to craft the necessary compelling insights.

Or, even if they do manage to create some insightful pieces, they see the job as being done when the material is published, and do nothing to equip the sales people to conduct the subsequent sales conversation in a way that personalises the problem or dramatises the opportunity for the prospect.

To compound the issue, marketing is often still measured and rewarded by the number of leads they generate and not on the number of qualified opportunities that end up in the sales pipeline. And sometimes - speak it softly - they simply aren’t smart enough to grasp the new realities of marketing.

Any of these factors by themselves can scupper a Challenger Selling initiative, but if they are compounded together, you’ve probably got no chance of pulling the initiative off. A handful of your smartest sales people will find ways of coping without, but the bulk of your sales people are going to struggle.

WHAT IF YOUR SALES PEOPLE AREN’T UP TO THE TASK?

Challenger Selling, by its very nature, requires a level of intelligence, curiosity, cognitive capability and agility that isn’t present in all sales people. Unfortunately, in many organisations, such sales people are in the minority. The research actually concluded that around a quarter of the sales population are natural challengers.

Others might have the potential to be developed to act more like Challengers if given the necessary coaching. But it’s an unfortunate truth that many sales people lack some of the basic attributes to ever adopt a Challenger mentality. It’s better to recognise this and reassign them to other responsibilities than to expect them to make the transition, no matter how much training they are exposed to.

In a way, Challenger is simply a response to increasing customer expectations. Your prospects expect more from every sales interaction. They have become immune to traditional “always be closing” sales tactics. They enjoy having a stimulating conversation with a sales person, and they resent being subjected to yet another ineptly delivered product pitch.

The uncomfortable consequence is that there are a group of sales people who may have been effective in less demanding times, but will increasingly and progressively struggle to cope with a more demanding prospect base. Implementing Challenger simply highlights their shortcomings a little ahead of time and brings forward the inevitable.

WHAT IF YOUR ORGANISATION ISN’T SUFFICIENTLY COMMITTED?

Implementing a Challenger Selling initiative can generate truly transformative rewards, but it requires a non-trivial company-wide commitment to make it work. If you’re prepared to seek out and confront any weaknesses in your marketing and sales organisations, you stand a great chance of reaping the benefits.

Maybe you’re uncomfortable about the consequences. But how much more uncomfortable might it be if a competitor seized the opportunity to build an unbridgeable advantage in their go-to-market strategy? In this, as in so many other matters, great rewards are often founded on tough choices...