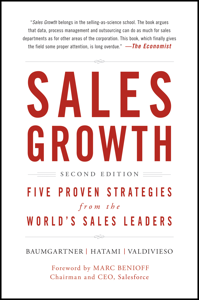 I recently had the privilege of interviewing Homayoun Hatami and Holger Hürtgen of McKinsey about the ground-breaking thinking contained in the extensively revised second edition of “Sales Growth - Five Proven Strategies From the World’s Sales Leaders”.

Featuring an introduction from Marc Benioff of Salesforce, the book offers a fascinating roadmap to revenue growth for companies of all sizes. Regular readers will know that I have a particular interest in how analytics can drive sales performance improvement - and the book offers an impressive range of tangible examples of the practical application of analytics in the modern sales organisation.

In fact, there are too many examples to cover in one article, so for what I hope will be a series of related blogs on the subject, I want to start by focusing on the role of analytics can play in making the most of our existing sales resources...

It’s obvious that the emergence of sales analytics is much more than a minor fad: in fact, according to Hatami “The advent of analytics will prove every bit as important to sales as the advent of television was to advertising”. That’s a dramatic statement, but one that I am convinced we will see justified in the years to come.

It’s already clear that today’s most forward thinking sales organisations are deriving significant efficiencies from applying analytics to the sales process - and in doing so opening up a growing gap with their less well informed competitors.

One of the most powerful ways in which analytics is positively impacting sales performance lies in rationally optimising the allocation of scarce sales support and pre-sales resources to competing projects. Traditionally, many sales organisations have operated on a “who shouts loudest” basis, but this is a horribly inefficient way of maximising the return on sales resources.

As Hatami and Hürtgen point out, applying sales analytics to the problem allows these resources to be rationally dispatched in a way that is most likely to maximise both sales win rates and customer lifecycle value - and allow opportunities to be scored and ranked according to their true potential.

Intelligence about patterns of performance can also increasingly be used to identify tasks that could be delegated to support resources or automated, freeing up sales people to focus their attention on the tasks that are most likely to create customer value.

Does this imply that all sales people are going to be replaced by automatons? I don’t think so - but I believe (as does the team from McKinsey) that a growing number of relatively simple, repetitive sales tasks have the potential be automated and that machine learning and AI - backed by analytics - can equip sales people to make smarter judgements and free them up to use their time much more productively.

That all sounds a compelling prospect and a highly desirable outcome, doesn’t it? But like any complex change management initiative these programmes can be made or broken by the choices made when implementing them. Our conversation touched on a number of critical success factors - and I’d like to focus on two in particular.

First, there is a critical new role for what Hatami and Hürtgen referred to as “Business Translators” - people who can act as the critical pivots between the sales organisation and the analytics application, looking for patterns and interpreting data.

Second, given the substantial cultural changes involved in evolving from an intuition-led to an evidence-based approach to selling, it is critical that the sales organisation are actively involved and engaged in the project, and that they buy in to the benefits.

It’s usually worth conducting an initial trial with a team that has a supportive sales leader, and leveraging their success to persuade the sales organisation at large of the benefits - and as Hürtgen pointed out, being prepared to sacrifice mathematical perfection for practical acceptance and adoption.

McKinsey’s experience is that organisations that adopt the principles I’ve just described are quickly able to create a wave of excitement and enthusiasm for analytics in which everyone clearly sees the benefits - whereas over-engineered projects can quickly become derailed by an unenthusiastic sales response.

By the way, it’s not just large corporations that can benefit - I’ve directly observed a growing number of growth-phase companies that have achieved tangible benefits from implementing a simple, pragmatic approach to sales analytics.

But whether you’re large or small, my strong sense is that every progressive sales organisation will increasingly depend on analytics as a source of competitive advantage. So here is my concluding question: is this the year in which you will use sales analytics to outthink and outperform your competition - or are you going to wait for them to do it to you?

Bob Apollo is the Managing Director of UK-Based Inflexion-Point Strategy Partners and a Fellow of the Association of Professional Sales. He writes and speaks regularly on the critical importance of establishing scalable sales processes in driving B2B sales success.

This article was originally published on LinkedIn