Can you buy in to these 5 Contrarian Concepts? 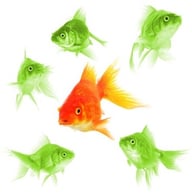 The problem with slavishly following “best practice” is that it’s almost always what the really smart people (and organisations) used to do. By the time the concept has become widely recognised, the people and organisations that pioneered it have moved to the front of the next new wave.

That often involves embracing principles that at first appear to be contrary to commonly accepted norms - but which enable early adopters to stand out from the crowd. Here are my candidates for 5 apparently contrarian concepts that seem to have the capacity to deliver exceptional results.

1: Focusing on the Buying Process - rather than the Sales Process

Most traditional sales performance improvement initiatives are still based around making the sales process more effective. Now I’m not going to suggest that these initiatives can’t have some impact, but the problem with solely focusing on sales process is that it leaves out the most important player in the process: the customer.

Surprisingly, some organisations still have no defined “sales process”. And even when they do, the stages are largely based around a handful of (often poorly defined) sales actions and progress from one stage to the next is based on the completion of some sales activity milestone such as “demo performed” or “proposal delivered”.

But there is a way of dealing with this - and it’s being implemented by a fast-growing minority of sales organisations (unsurprisingly, they seem to be outperforming their peers). They are designing their pipeline stages and milestones around the key events in their prospects typical buying decision process - and aligning their sales activities accordingly.

To continue our contrarian theme, most sales skills development programmes are based around training average sales people on the best practices that are implemented by most top sales performers. Once again, there’s an argument for encouraging best practice, but there’s a guilty secret that the vast majority of these programmes completely ignore.

It’s simple: the average sales person’s performance can be lifted far more by systematically eliminating the most common avoidable errors than they can by hoping that they can somehow be trained to embrace all the best habits of that tiny minority of natural sales superstars. But what these top performers do instinctively typically can’t be bottled.

But there’s a raft of avoidable errors that could be eliminated from the average sales person’s repertoire - errors like:

The mechanism is deceptively simple: a series of simple checklists that help to eliminate errors of ignorance, assumption and ineptitude. You can read more here.

3: Focusing on the Cost of Inaction - rather than the Return on Investment

There are a number of reasons why an apparently attractive ROI won’t necessarily result in a sale - I’ve written about some of the more obvious ones here. You see, unless there is a compelling reason to change, prospects are likely to stick with the status quo.

In fact, that’s one of the primary reasons why the first two stages in our buyer aligned sales process (see concept #1) an increasing recognition that the status quo needs to be challenged - “open to the possibility of change” and “deciding whether they need to act”.

That’s why focusing on the costs and consequences of inaction is such a powerfully disruptive sales strategy. Let your competition lead with ROI if they want to - you’ll get much stronger traction, and conduct a much more effective sales campaign, by first answering your prospect’s “why change” and “why now” concerns rather than leading with a “why us” strategy.

4: Challenging Perceptions rather than Solving Problems

It’s often much more effective to challenge your prospect’s existing thinking than it is to restrict your focus to solving their known problems. I’m happy to give the authors of the best selling "Insight Selling" credit for this contrarian concept - but despite the success of the book, few organisations have whole heartedly implemented the principle in their sales and marketing programmes.

The problem with traditional solution selling approaches is that they tend to focus almost exclusively on the problems the prospect is already aware of, or would find it easy to recognise if they were pointed out to them. Solution selling is undoubtedly more effective than product selling - but when every vendor adopts the approach, their “solutions” all end up looking remarkably similar.

The great benefit of bringing fresh thinking to the attention of the prospect - constructively challenging their existing perceptions - is that it gives the sales person the opportunity to completely reframe the problem the prospect really needs to solve. When implemented effectively, the challenger mind-set can take the sales campaign onto a completely different plane - assuming that you manage to adopt the concept before everyone else does.

5: How Your Approach is Different before How Your Solution is Better

The final contrarian concept is to avoid the rat race in which every vendor claims their solution is better than their competitors. It is clearly an incredible claim, and it’s one that most educated buyers discount. Because almost every vendor claims it, nobody believes it. And even if - based on fine, transient differences in functional performance - it happens to be true, leap frogging developments mean that it probably won’t last.

Customers are far more likely to remember why your approach is different - as long as you deliver the message in a confident, credible way - than any claims to fleeting functional superiority. What’s better, positioning based on your distinctively different approach is likely to last.

So - before you’re tempted to claim that your solution is better, first be sure to establish just how and why your approach is different.

So there you have it: 5 contrarian but unsurprisingly effective concepts. And they all revolve around thinking and acting different - not just within your organisation, but in your communications and relationships with you customers. If you haven’t already put them into practice, you might want to get started before your competitors cotton on.

I think you’ll be pleasantly surprised by the impact. And if you need any contrarian advice on putting these concepts into practice, please drop me a line.