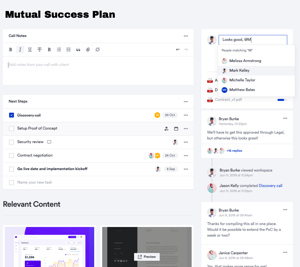 I’ve written before about the persuasive power of a Mutual Success Plan in technology-based B2B sales, and I believe the concept is so important that it is worth returning to it, particularly in the light of recent developments in collaboration technology.

You may have come across the spiritual precursors to the Mutual Success Plan in the form of “Close Plans” or “Mutual Action Plans” - you may already be using one or the other of these concepts - but in a world where enabling our customers to achieve provably better outcomes has never been more important, those more traditional approaches have been found to be lacking...

“Close plans” are typically largely or exclusively internally focused: they contain a series of tasks or actions which, if performed by the salesperson, are supposed to increase their chances of winning the customer’s business on the date and at the value currently projected in the sales pipeline.

Now having an internally focused close plan is often better than not having any sort of plan at all, but these plans typically ignore many or all of the key things the customer needs to do before they are ready to place an order. They also - often by design - identify receiving an order as the purpose of the exercise.

“Mutual Action Plans” at least make an attempt to involve the customer, and to interweave the actions of both parties in their journey towards their respective destinations - typically getting to the point where the customer is prepared to issue and order, and the salesperson is prepared to accept this.

In the so-called good old days (of course they were nothing of the sort for the customer) the receipt of a bookable order was the pivotal moment in the customer acquisition cycle. And when the majority of the lifetime revenue of a project was often billed upfront in the form of an initial licence purchase, you can understand why.

The World has Moved on...

But, of course, the world has moved on - and, of course, it needed to. Customers got justifiably tired of being burned by purchases of “shelfware” that failed to deliver the expected results, and which gave them little subsequent recourse other than to not buy from that vendor again (despite this, many still did).

We’re in the midst of an accelerating trend towards an as-a-service economy. Customers have become increasingly receptive to the idea of paying for the value of the solution over the lifetime of the project, and to the benefits of deciding whether or not they are going to renew based on the outcomes they have already achieved.

Our job - and the customer’s decision journey - isn’t over when we take their order. It’s only over when the customer achieves the outcomes they expected when they signed up to the project. And if we fail to either fully explore or fully achieve those outcomes, we are likely to fail.

Focusing on our Customer’s Expected Outcomes

A Mutual Success Plan uses the customer’s expected outcomes as its anchor, and then works backwards through the milestones that are going to have to be completed if those outcomes are to be achieved.

The best (but by no means all) of the current generation of plans already do this and are already much more effective as a consequence. But even these enlightened plans are often based on a document which is managed and updated by the vendor.

A Journey, not a Destination

In the as-a-service economy, where if our customer doesn't renew they will probably never be profitable, the completion of our initial Mutual Success Plan is just the first part of a continuing journey with our client rather than a final destination.

As we'll explore in a moment, Mutual Success Plans are most effective when they are based on open and regular collaboration between the vendor and the prospective customer from an early stage in the buying decision journey, and on a clear articulation of the customer's expected outcomes.

But internal alignment between the vendor's customer-facing functions is also critical. Sales, implementation and customer success all need to be aware of and involved in the shaping of the Mutual Success Plan. There should be no surprises. And the customer should not have to repeat to the implementation team what they have already revealed to the sales team.

However, the most widely used document sharing platforms are not the complete answer: whilst they typically selectively restrict or allow the rights to view or edit the document, for maximum effectiveness, a Mutual Success Plan needs to be more granular than that.

My first implementations of Mutual Success Plan frameworks with clients were typically conventional shared documents - often based on Excel or Word or their Google equivalents. Don’t get me wrong - these represented real progress over not having a document at all, or the salesperson being the only person who could edit.

But we soon started asking “what-if” questions - such as, what if we could restrict some of the elements of the success plan for internal viewing only? That would allow us to include important additional information for the members of the vendor team that it might not be appropriate or timely to share with the client and would enable us to create an even more useful document.

Thankfully, granular document sharing platforms are now becoming available - not just at the document level, but at the document element level. These give us the possibility - for example - of allowing the customer to input and maintain details of their stakeholder group in the shared document whilst enabling us to privately assess each member’s influence and attitude.

This would also allow us to differentiate between shared tasks that should be in the public domain and our own internal tasks, some of which might be best restricted for our eyes only to avoid complexity or confusion.

A Single Shared Version of the Truth

You can imagine my delight when I came across a software vendor who understood my experiences and shared my vision. Recapped.io have created just such a living workspace for complex deals. Offering a single version of the truth, shared between prospect and vendor, the platform is already driving some impressive results.

If the situation I’ve described resonates with you, and if you’re curious to take a look at an example of just such a Mutual Success Plan in action, please book a call and I’ll be happy to open your eyes to the possibilities.

An earlier version of this article was originally posted on LinkedIn.