Would you prefer your sales people to be heroes or pragmatists? 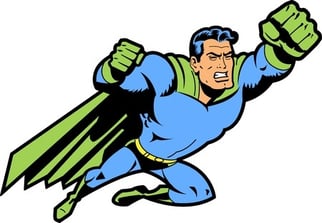 What I have to say probably won’t go down particularly well with a sector of the sales improvement community whose primary purpose seems to be to convert every sales person into a superhuman hero capable of leaping customer objections in a single bound.

Well, it might sell books to people hoping for miracle cures, but the approach is neither realistic, practical nor particularly effective. In the complex and complicated of B2B buying these “heroic” techniques are likely to be counter-productive.

That’s why I suggest that B2B CEOs and sales leaders who are striving to build truly scalable sales organisations should be looking for pragmatists rather than heroes or miracle workers.

It’s not as if it’s realistic to recruit and run a team of individual heroes anyway. Outside of the comic book market, it’s an oxymoronic concept. The problem with Eagles, as one of my sales mentors kept reminding me, is that they don’t flock.

Heroes tend to believe that nothing is impossible. They see the most difficult opportunities as personal challenges. They tend to divert scarce resources away from otherwise more winnable deals. At the end of the day, they are not always that successful - and as for trying to replicate them - well, good luck with that.

Pragmatists are a delight to work with and a pleasure to have an intelligent after-work drink with. With all of these factors in their favour, why would any sales leader want to ride the grief curve of managing a team of self-declared heroes?

By the way, the Value Selling System® is an excellent framework for continuously developing a team of intelligent pragmatic sales people. You can find out more here.