Today is D-Day: drawing parallels with Crossing the Chasm

70 years ago, on the 6th June 1944, the largest seaborne invasion in history assembled off the Normandy coast in the first critical step in freeing Western Europe from the yoke of enemy occupation. 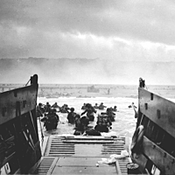 As we know, the exercise succeeded in creating a bridgehead that provided the jumping-off point for the progressive expansion into adjacent territory. Success was not guaranteed. The Allies failed to achieve all their day one objectives. But they managed to establish enough of a defensible position from which they could expand.

Now, I’m not the first person to draw a comparison between how companies can progressively develop leadership positions in their market place and Operation Overlord - Geoffrey Moore uses the analogy in “Crossing the Chasm”. But I thought that today might offer the opportunity to review the parallels.

If you’re an ambitious organisation with your sights set on market leadership, the combination of the market sub-segment you choose to focus on first, the tactics you choose to employ and your ability to execute them typically marks the critical difference between success and failure.

And, as we know, as anyone who has ever been involved with early-to-mid stage companies, most attempts to enter and dominate markets struggle to even establish a defensible initial foothold, let alone a base for progressive expansion.

First, you need to choose the right beachhead on which to launch your initial attack, based on sound intelligence rather than speculation about your likely ability to establish a solid presence. By far the best way of achieving that is to focus on a compelling problem that your target audience has to do something about that you can solve better than any other option open to them.

Your chosen landing point (targeted initial sub-segment) therefore needs to be a combination of a clearly identified role or roles within the right sort of organisations, who share common action drivers that are going to force them to do something. Oh, and they need to turn to the same set of influencers when they go about deciding what to do.

Next, your invasion force - the combination of products and services that are going to be necessary to entirely solve the problem your prospects are wrestling with - needs to be complete. This is the point where many attempts to generate market momentum fail. They represent incomplete solutions to the prospect’s problem, fail to deliver the promised benefits, and as a result might get bought but fail to get adopted.

Even if you’re not thrown back from the beach, you’ll inevitably struggle to make progress inland until and unless you’ve mastered this. It’s what Moore refers to as the “Whole Product” and has to be defined from the prospect’s perspective.

And even after you’ve succeeded in establishing your initial bridgehead, you have to be able to expand into adjacent market opportunities if you are to fully realise your potential. This is because in order to secure the beach, you need to focus your resources on a narrow front that represents a small subset of your ultimate potential. But you can't afford to just sit there.

Winning the beachhead requires focus and discipline, and concentration of force on a small point where you can achieve local advantage. It will not always succeed. But dissipating your invasion forces will inevitably fail.

Just imagine if the Allies had evenly distributed their parachute drops over France rather than concentrating them on the area just behind the beach. Or if the landing craft had been spread over the entire Normandy coast rather than on a few short stretches of sand.

If you’re trying to become a market leader, where you choose to start and how you organise your approach is clearly critical. I believe we can learn a lot of useful lessons from the events of 70 years ago - and the intensive planning and training that preceded them.

But finally, in making the comparison with D-Day and applying it to business strategy, I in no way want trivialise the contribution made by those who took part. I’m part of a generation whose fathers lived through the events of 70 years ago, and I’ve come to understand how much they sacrificed for our freedom.

One last thought: June 6th is significant for another reason: on that day in 1968 Bobby Kennedy died at the hand of an assassin's gun. One has to wonder how the course of history might have changed had he fulfilled his destiny and become the 37th President of the United States. Instead we got Richard Nixon.