The dumbest opening question a salesperson can ask 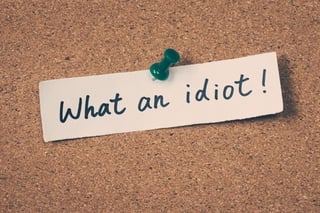 No doubt we’ve all been the recipients of bad advice, and occasionally and unwittingly may have offered bad advice to others. But there’s one piece of advice that I still see offered by so-called sales experts (the latest only yesterday) who frankly ought to know better.

Whenever I hear the dreaded phrase it raises my hackles and if I’m any judge of the readership base for these articles it ought to have the same effect on you.

If it doesn’t, you probably want to unsubscribe now, because I imagine you’ll end up disagreeing with many of the other positions I’m going to take in the future.

Today's focus is on what I have come to believe is the dumbest opening question a sales person could possibly ask (and trust me, there are a lot of questions that could qualify for that award, so the competition is pretty tough)…

My award for the dumbest question (drum roll) goes to:

“What’s keeping you up at night?”

This question is just so wrong in so many ways, not least of which because it opens the possibility to all manner of tone-lowering literal responses that could include “my wife’s snoring”, “a bad attack of the piles” or “an overspiced Bangalore Phal”. And frankly, if we open the door to these or similar responses, we fully and richly deserve what we get.

What that does for the potential quality of the subsequent conversation I leave to your imagination. Of course, most prospects are either too polite to respond in that way. That doesn’t stop them positioning the offending salesperson as a trite and uncreative numbskull.

But that’s a trivial reason in comparison to the real problem with this question: it shows a total lack of respect for the prospect and a complete inability to anticipate the common interests, priorities and concerns of similar people in similar organisations. And it denies us the ability to showcase our potential to add value to both the conversation and their business.

Let’s be clear: we can’t be expected to know the details of our prospect’s business better than they do, and sooner or later we’re going to have to work out whether they have a critical problem that we have a uniquely capable solution for. But asking them what keeps them up at night isn’t going to get us there. If nothing else, it cedes control of the conversation to the prospect in a completely unpredictable and unmanageable way.

If we’re to be worthy of any serious consideration by our prospect, it’s because there are some things we know more about than them. It’s because we have had the benefit of talking to tens, hundreds or thousands of similar people in similar organisations to theirs. It’s because we have the ability to recognise patterns and to bring insights about what seems to really matter to many of their peers.

Do we really want to throw that advantage away by asking them what keeps them up at night? Wouldn’t it be better - far better - to share some of the insights that we’ve uncovered and highlight some of the common concerns that we’ve identified? Couldn’t we then reinforce those insights by introducing some unconsidered needs or consequences that our prospect hadn’t thought about?

None of this precludes us from asking the prospect what their perceived problems or priorities are. But the approach I’m recommending allows us to do a far better job of “setting the scene”, and of establishing a reputation as a trusted, credible advisor. It puts us in a far stronger position to actually educate our prospects and to uncover previously unconsidered needs.

So with all of these benefits, why would we want to encourage or allow our sales people to do something so dumb as to ask their prospect what’s keeping them up at night, when there’s so much more they could do to bring genuine value to the sales conversation. In fact, it’s so dumb that we should probably regard it as grounds for dismissal by virtue of gross incompetence.

Then let’s see how often this inept, out of date phrase continues to be used…

Bob Apollo is the Managing Director of UK-Based Inflexion-Point Strategy Partners. He writes and speaks regularly on the critical importance establishing of scalable sales processes in driving B2B sales success.

Other related articles include:

This article was first published on LinkedIn.