Is your prime customer contact a budget maker, shaper, taker or faker?

Note: I updated this article after first publication to acknowledge the existence of "budget fakers" in addition to budget makers, shapers and takers. 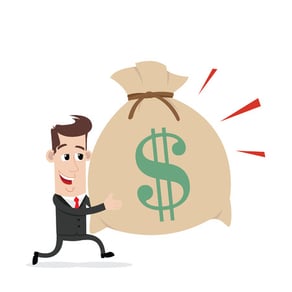 Most sales methodologies stress the importance of identifying whether a budget exists, and a naïve interpretation of the BANT qualification framework [Budget, Authority, Need, Timeframe] might imply that unless a current and adequate budget exists, it’s not worth trying to sell the prospect anything.

This is, of course, a silly and narrow-minded perspective if you aspire to do anything more than take orders against already well-defined and formally funded needs. Many complex B2B sales come to a successful conclusion even though there was no formal budget at the initial point of contact.

If the problem is critical enough or the opportunity attractive enough, if the issue is urgent enough and if the problem owner is powerful and influential enough, budget will be found. But there are relatively few people with the power to conjure money out of thin air.

That’s why it’s so important that we assess whether our current prime contact is a budget maker, a budget shaper, a budget taker or (least staisfactory of all) a budget faker…

True budget makers - at least when significant sums of money are involved - are relatively rare beasts in most organisations. They tend to be CEOs or senior executives, often at C-Level or not far below, with responsibilities for significant revenue streams or cost flows.

If a budget maker truly believes in a project, they will find the funds they need by one means or another. Now, of course, such projects are few and far between, but if we can position what we do as supporting a critical priority for one of these budget makers, the budget stands a good chance of being made available.

That’s why associating our project - even if relatively insignificant on the grand scheme of things - as being key to the success of a critical high-level initiative that is being energetically promoted by the CEO or a similarly senior executive, the odds are that the funding will be found even if it wasn’t called out as a line item in the budget at the start of the year.

The next level down are the budget shapers. These are people that are responsible for significant expenditure and even if they cannot usually create funds where none exist, they have the power and flexibility to re-allocate existing budgets to support the initiatives they want to champion.

This may, of course, result in already-allocated budget being pulled away from another project that is now seen to be a less pressing priority. These re-allocations happen all the time, and it’s a very good reason not to sit complacently on our laurels if we’re told that our project is budgeted for.

That money could easily be ripped away if the project is no longer seen to be a higher priority than other competing investment opportunities. Budget shapers can be powerful champions, but they can also endanger the success of our project if their attention turns to something they regard as more pressing.

The vast majority of people in organisations (even some in what appear to be relatively senior roles) are neither budget makers nor budget shapers. They are mere budget takers, dependent on others with more financial authority to allocate funds to them.

They have very little freedom to reallocate budgets - they are basically told to make do with what they have been given, and their pet projects (and, for that matter, pet vendor relationships) can be very vulnerable to shifts in priority at a higher level.

This is why it is so important that we don’t just ask the “is there a budget?” question, but that we carefully assess whether our current prime contact is a budget taker, shaper or maker, and how credible and influential they appear to be in defending their position.

We might think that working through a budget taker is a high-risk startegy. But it pales into insignificance compared to the potential pain and frustration that will be heaped upon our heads if we turn out to be working with a Walter Mitty-like budget faker.

We can't rely on the veracity of their responses when we ask them if they have a budget, and if they are the decision maker. Rather then relying on direct questions, we need to think laterally - for example seeking evidence of their successful involvement in driving other similar projects to a successful conclusion.

REACHING UP TO HIGHER AUTHORITY

Hopefully, you will be able to weed out the budget fakers but if - as will often be the case - our prime contact is someone who is no more than a budget taker, we need to attempt a number of things:

WHEN THERE APPEARS TO BE NO BUDGET

Clearly having a budget is important, but the initial lack of a formal budget should never be a reason to disqualify an opportunity if the economic case for change is sound and the need for urgent action is clear.

But it’s really important that we understand how budgets are allocated and by whom, and what criteria are applied when working out how and where to actually spend the money. And we certainly need to recognise whether our current prime contact is a budget maker, shaper, taker or (heaven forefend) faker.

I suggest you take a close look at your sales team’s current opportunities, probe for how close they are to the real sources of budget power, and insist that they develop and implement a credible strategy for every budget-taker-dependent deal.