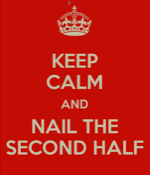 We've reached the halfway point in the sales year, and this is a particularly good time to take stock. Early indications are that a number of sales organisations have some room for improvement, and that as many as 60-70% are currently behind plan.

For many, the shortfall is recoverable and there’s still time to catch up - but probably not if they simply carry on what they have been doing since January. And even if you’re currently ahead of plan, business as usual probably can’t be guaranteed to keep you there.

We’re heading into an often-troublesome quarter. Decision-makers are often away on holiday, and apparently smoothly running sales processes can be derailed by unanticipated absences.

That’s why I’m going to suggest that your first priority must be to identify all the opportunities that are expected to close in the 3rd quarter, and carefully double-check both the prospect’s motivation to act quickly, and the precise details of the decision-making process.

Let’s assume that the indicators are promising. Even if it looks as if you have a solid ROI case, it’s always worth making sure that the consequences of inaction are clear to your prospect. What would happen if they simply let the status quo prevail for a little longer?

How would your sponsor be affected by the delay? Equally important, who else would be affected? What would the consequences be for their personal and departmental Key Performance Indicators and for the business as a whole?

The sticky lure of the status quo

If you don’t know, and even more importantly if your sponsor doesn’t know (or if there are no consequences associated with delaying taking action), there’s an uncomfortably large chance that they will end up sticking with the status quo.

In a nutshell, until you’ve sold the need to solve the problem, and solve it now rather than later, your chances of successfully selling your solution are significantly compromised. And don’t imagine that a solid ROI will offer any form of miracle cure - unless you’re aware of all the other investments your prospect might be considering, and you’re confident that they believe the likely return on your project is better than most or all of the alternatives.

And even if all the signals from your sponsor are positive, are you absolutely convinced that they have the power and authority to mobilise their colleagues to agree to take action? Even if they say they understand the approval process, how can you test that they do?

The simple fact is that many apparently suitable sponsors actually don’t understand how their organisations go about making and approving buying decisions - or how those decisions get “up on the system” so that an order can be placed. You need to check, and check again.

Learning from every significant decision

But what about the broader lessons learned from the first half-year? I strongly recommend that you carefully analyse your wins, losses and the opportunities that ended with a decision to do nothing. What patterns can you recognise?

For your most significant wins, losses and no decisions, you need to identify the common factors - and you need to pay attention to the whole marketing and sales cycle, and not just the final stages of the sales process.

Just as most sales wins are set up at the start of your engagement with the prospect, most losses and no decisions are not down to a failure in closing techniques, but in the fact that poor decisions were made early on in the process.

What factors - often more obvious at the end of the process - should your sales people have focused on at the start of the sales dialogue? What could you have done to qualify a bad deal out earlier on in the sales process?

If you're going to lose, you had better lose early...

This ability to identify and eliminate poorly qualified opportunities early is one of the defining differences between high and low performing sales people. Top performers often seem to do it instinctively - but you’ve got to work out how they do it, and insist that all your sales people adopt it.

Equally, deals get delayed for a variety of reasons. Some are unpredictable and/or unavoidable. But all too often, something the vendor does or does not do contributes to the delay. Where are the bottlenecks in your customer acquisition process, and what are you going to do to eliminate them?

Here’s my checklist for a half-year review:

If you’ve got anything to add, please share your ideas below - and good luck in exceeding your revenue targets for the rest of 2014 and beyond.