It’s often quoted, but worth repeating: the biggest single reason why B2B sales people lose seemingly well-qualified opportunities is because the prospect concluded they didn’t actually have to do anything - and so they decided to do nothing. 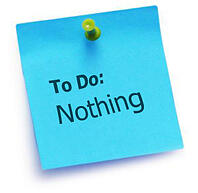 It’s hard for your sales people to blame the “competition” for being more keenly priced or having better features when the prospect decides that they are actually more comfortable sticking with the status quo - in fact your sales people can only blame themselves.

It’s a hard thing to acknowledge, but whenever a sales person loses to “no decision”, they either failed to qualify the opportunity accurately, or failed to execute a good enough sales strategy. There are no other excuses…

We can sympathise with the prospect’s position, can’t we? Why should they risk changing something when sticking with their current situation would allow them to live a comfortable life? At least they can’t then be blamed for choosing the wrong solution.

And if we were faced with a similar choice, we might well do the same. Because if there is no compelling reason to act, why on earth should we want to change? Why go through the disruption? Why take the risk? Why not simply let sleeping dogs lie?

A glimmer of interest...

So here’s the problem: there are hierarchies of interests and needs. At any point in time, your prospects will have many more interesting needs than they could possibly afford the time or the budget to deal with. But that won’t necessarily stop them “kicking the tires”.

Your prospects will have many more important needs than they have the ability or resources to address - but that won’t stop them dragging hapless vendors into often lengthy, detailed and expensive evaluations of potential solutions.

But it’s only a handful of truly time-critical needs that are absolutely guaranteed to cause your prospects to decide to take action - because the costs, risks and consequences of sticking with the status quo are simply too painful to bear.

So before you allow your sales people to go dashing off on a series of poorly-qualified wild goose chases, you really ought to insist that they demonstrate that they have either uncovered or developed a genuinely compelling reason for the prospect to act. If they can’t, they should move on.

This discipline is nothing new: during the decades over which I’ve had revenue responsibility, top performing sales people have always had the gift of eliminating poorly qualified opportunities early - while their middle-of-the-road colleagues were inclined to hang on to no-chance-of-closing deals like a drowning man holding on to a waterlogged piece of wood.

A compelling reason to act can take a number of forms: if you’re in a repeat purchase environment, it can be as simple as the spectre of running out of a vital resource that will prevent your prospect from building their products or delivering their services.

But if you’re in a considered purchase environment, things are a little more complicated. Sometimes, you’ll get lucky and uncover a truly compelling event - a finite, immovable date by which the prospect has no option but to do something.

More often, though, you’ll be looking for accumulating impact - a situation in which the costs and negative consequences of inaction are already high and will remorselessly increase over time in a way that makes it self-evident that the prospect needs to act sooner rather than later.

So how can your sales people tell whether they have identified the cost of inaction and uncovered a truly compelling reason to act? They can get a pretty clear sense by asking their prospects some or all of the following questions:

If the answers are weak - or unknown - your sales people need to be very cautious about concluding that the opportunity is real. But they shouldn’t give up. They should probe around in an attempt to identify some truly compelling reasons to act.

Get compelling - or get out...

Part of the problem, of course, might be that they are talking to someone with insufficient authority. In which case, asking these questions sensitively can sometimes open the door to someone who is really capable of mobilising their organisation to take action.

But if after all their efforts, your sales person is still at a loss to define the compelling reason to act, it may be time to qualify the prospect out or put them back into nurturing mode, and for your sales person to turn their attention to uncovering or developing truly time-critical needs with other people in other organisations...