The science of sales forecasting: combining fact and judgement 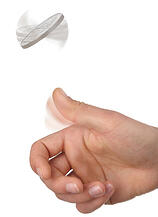 The failure to accurately forecast sales revenues has critically compromised the careers of many promising CEOs, Sales VPs and Sales Managers. Getting it wrong - and particularly getting it wrong consistently - sheds jobs and shreds reputations.

Despite all the obvious dangers, the average organisation continues to struggle. A series of annual studies by CSO Insights and others confirms that average sales forecast accuracy at a deal-by-deal level remains little better than flipping a coin.

And yet a significant minority of organisations are managing to achieve much higher levels of accuracy at every level - from the individual sales person through to the company-wide number. What are they doing better? What are they doing differently?

First - and this is the critical foundation - they define their pipeline stages not by the activity that their sales people have undertaken, but by verifiable evidence of progress in the prospect’s buying decision process.

This means that opportunities can only be advanced from one stage to the next when key buyer-behaviour milestones have been observed and confirmed. For example, submitting a sales proposal to the customer is not a valid milestone - but getting their confirmation that the proposal has addressed their needs might be.

Next, top-performing sales organisations regularly and rigorously re-qualify sales opportunities at each stage of the pipeline against a series of increasingly tough criteria based on past analysis of winning and losing deals. In some of the most effective organisations, sales managers adopt the position that opportunities should be qualified out unless the sales person can justify retaining them.

The consequences, as you might expect, are fewer, better-qualified opportunities and a far more realistic pipeline valuation. They key mantra here is “if you’re going to lose anyway, you’d better loose early” - before a great deal of resource has been wasted.

Top-performing organisations also pay particular attention to deal velocity and time-in-stage. They know that - all other factors being equal - the longer an opportunity remains stubbornly “stuck in stage”, the less likely it is to close. Research by the TAS Group showed that on average it takes more than twice as long to loose a deal (or, probably more accurately, to recognise that you have lost it) than it takes to win one.

As a result, fewer bad deals get through to the forecastable letter stages of the pipeline. You’ll notice that the criteria I’ve mentioned so far are largely based on issues of provable fact. So where does the judgement come in?

The simple reality is that in complex deals with multiple factors that could affect the outcome, you can’t rely on facts or statistics alone. That’s why you pay your top sales talent the big bucks. And that’s why you should properly expect them to apply effective judgement when assessing the likelihood that an opportunity will close in a given forecast period. But they need some guidance - and a clear frame of reference.

The bit about “in a given forecast period” is important. There’s a big difference between assessing the probability that an opportunity will close at some point in the future and making an informed judgement about the chances that it will close within the current forecast period.

Checks and balances (and "no miracles")

For this to work effectively, you have to apply some fact-based checks and balances. These must serve to exclude the “and then a miracle happened…” situations where, for example, the sales person forecasts a deal closing from a pipeline stage where few or no similar deals have closed within the remaining timeframe.

The judgements you are then looking for need to be carefully characterised, and your sales people need to know that their performance against the defined expectations is going to be measured. Here are guidelines that have worked very effectively for a number of the companies I have worked with or for:

Over time, you should see your forecast accuracy improve. By combining fact and judgement, you’re giving yourself the best chance of beating those gambler’s roll-of-the-dice style odds - and of keeping your employees, management and investors happy. Please add to the discussion - what are your top tips for accurate sales forecasting?