The Case for Focusing on Critical Problems 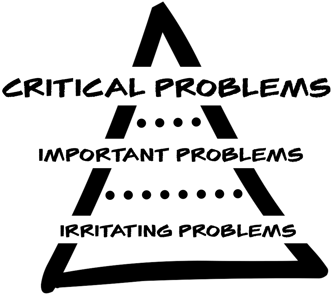 Our prospective customers will always have many more potential issues than they can possibly afford to address in the short term. There will always be a bunch of problems that they would like to - or feel they need to - solve.

But one of the reasons why losing to “do nothing” (rather than to a competitor) is now the most common outcome of even apparently well-qualified sales opportunities is that if organisations don’t feel they have to take action right now to deal with an issue, they will probably postpone or defer the purchase.

This is particularly galling for sales people (and their colleagues) who have often invested months of effort and received a string of positive signals from the prospective customer. They may have even been selected. They may have agreed terms.

But despite their herculean efforts, despite the good intentions of their champions within the customer, they still often end up failing to close the deal and win the sale - and it’s scant compensation to think that at least you haven’t lost to a competitor…

At least not to a conventional competitor - because it’s high time that we acknowledged that our most challenging competitor often isn’t an alternative solution from another vendor - our most powerful adversary is often the status quo.

That’s why it’s so important to recognise that our customer’s problems, issues and challenges fit into a hierarchy of irritating, important and critical problems:

At the bottom of the problem pyramid lie a large number of irritating issues. These problems, whilst annoying, are unlikely to expose the business to any significant risks. They may cause the prospect to investigate solutions but they are unlikely to cause them to invest significant resources to deal with them - unless, of course, these initially irritating problems start to have a bigger impact.

In the middle of the problem pyramid lies a smaller but often still-numerous set of important issues. These problems often have some measurable impact on the organisation, and the business would benefit from solving them.

They are likely to cause the prospect to seriously evaluate potential solutions, but if resources are tight and they have higher priorities organisations can often find ways to live with them via compromises and workarounds - at least in the short term.

The exceptions are important issues that are associated with a high priority strategic business initiative, in which case it can often be easier to find resources to address “merely” important problems.

At the top of the problem pyramid are a relatively small number of critical business problems that - once recognised - will inevitably drive the prospect to take action. They simply cannot afford to accept the costs and risks of sticking with the status quo.

These are the problems we should be targeting in our outbound marketing campaigns and pipeline building programmes. But we shouldn’t expect new prospects to always be willing to acknowledge these problems until we have built a relationship of trust.

This requires genuine thought leadership, and the ability to develop what initially may appear to be merely irritating or important problems into something the customer will come to recognise as critical once they have fully understood all the implications.

It should go without saying, but the problems we choose to target should not only have the potential to be recognised as being critical, but that they should also be chosen because we can offer a solution that is at least as effective (and preferably more so) than any other option they might choose to consider - otherwise we’ll end up drawing the prospect’s attention to problems that another vendor will end up solving for them.

Establishing the nature of the problem

Once we’ve persuaded our prospect to acknowledge a problem, we need to assess just where it currently sits on the irritating-important-critical scale. Here are some questions that can help:

Elevating the irritating or important to critical

Sometimes, apparently irritating or important problems - once the consequences are fully recognised - can be elevated into critical, “must-fix” problems. This can often be achieved by exploring the unrecognised or under-estimated implications.

This is why not taking the prospect’s description of the problem at face value is so important. If we can successfully draw the customer’s attention to consequences they may not yet have recognised (and if we do this better than any of the other vendors they may be talking to) we both strengthen the case for change and our ability to influence our prospect’s vision of a solution.

Here’s why this is so vital: according to Forrester, the vendor that does the most to shape the prospect’s vision of a solution wins nearly three-quarters of all contested opportunities. To which I'd add our own experience: the vendor that turns what appears to be an irritating or important problem into a critical one is most likely to be considered as a trusted advisor by the prospect - with all that implies for our chances of winning.

So: have you identified your ideal customers' most common irritating, important and critical problems? And what are you doing to target them?