Lessons from JFK’s inaugural about sales and marketing messaging 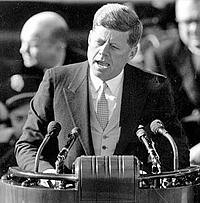 On a bitterly cold winter’s day 53 years ago in January 1961, the newly elected President John F Kennedy set out his agenda for change in an inaugural address that was carried around the world.

More than half-a-century on, his address is considered among the finest presidential inaugural speeches in American history, and contains the memorable and oft-quoted appeal to his fellow Americans to “ask not what your country can do for you, ask what you can do for your country”.

It’s an inspiring thought, and one that can serve to inspire a more enlightened approach to the way we communicate with our prospects and customers…

I hope that Kennedy’s speechwriter Ted Sorenson might forgive my adapting his resonant words to share the following thought with you: “tell not your prospects what you can do for them, but share what others have accomplished with your help”.

You see, I believe that there’s still an abiding problem with the way in which many vendors seek to communicate with their customers and prospects, and I see it reflected on a daily basis in marketing campaigns and sales conversations.

There’s too much telling what we can do for the prospect. Too much emphasis on features, functions and capabilities. And way too much unsubstantiated projection of the results they are going to achieve simply by using our products or services.

There’s too much leaping from problem to solution, without acknowledging the challenges and difficulties that inevitably lie in between. Our prospects know that change is hard. So why do we often insist on implying that it is going to be easy?

Promising easy solutions to complex, intractable problems simply isn’t credible, and in their heart of hearts, your prospects know this. They may hope for quick fixes, but they know that in the real world these are as common as Unicorns.

What they really want to know is how others in similar roles and situations have addressed the issue, what challenges they faced, how they surmounted them, and what results they finally achieved. And yes, they are interested in the scars that were accumulated along the way.

They are far less interested in what you claim that you might be able to do for them than they are in how you have helped others like them to achieve, and on what you have learned along the way. They want a realistic picture of the journey they are about to undertake.

Define yourself through the experiences of others

So - when a prospect asks you what your company does, resist the temptation to define yourself in terms of your products or services. Instead, share the collective experiences of others that have faced similar challenges and have addressed them with your help.

Don’t downplay the difficulties. Share the challenges and lessons learned along the way. Be honest and realistic. And if you do, you may inspire your audience to a vision of the future that only you can help them achieve.

Doing these things because they are hard...

Sales and marketing folks might think this a hard choice. In which case, I’ll close with another quotation from Kennedy in a speech at Rice University, this time about his commitment to land a man on the moon and bring him back again safely before the end of the decade: