In complex B2B sales, you face 3 types of competition 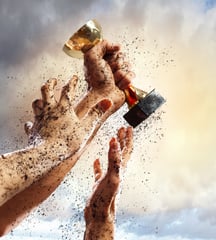 Most B2B sales people have a narrow sense of competition. They usually restrict their thinking to other vendors in the same market sector. But this absurdly narrow definition of whom or what they are really competing against is causing them to ignore some of the most significant forces that often stand in the way of a sale.

In complex B2B sales environments, and particularly in those where the purchase is discretionary (where the customer could and often does ultimately decide to simply stick with the status quo) the competitive landscape is much more complicated.

The first competitor can be simply described as the status quo - and it’s a far more significant factor than most sales people and many sales leaders acknowledge. In fact - according to a series of recent studies - in complex, high-value discretionary purchase scenarios, doing nothing is by far the most common outcome.

Of course, that doesn’t prevent either the seller or the buyer from investing huge amounts of time and other scarce resources in the meantime on the evaluation process.

There’s a simple rule at play here: no matter how interested the prospect might appear to be, unless and until they perceive the pain and risks of change to be far less than the costs and risks of sticking with their current situation, they will almost inevitably conclude that they might as well stick with what they already have.

It’s easy to be deceived by an apparently enthusiastic champion within the prospect who has glugged-down your Kool-Aid and can’t wait to get your solution installed. But unless they are a mobiliser with the influence and authority to persuade all the other key stakeholders in the decision process, both you and they are probably going to end up disappointed.

If we are to defeat “no decision” as a competitor, we have to ensure that there is a compelling need for action that everybody buys into. We need to ensure that they all believe that the pain of same is far higher than the cost of change. And we need to monetise and personalise that pain to every stakeholder - and preferably show how the cost and pain of the status quo will inevitably rise with every delay.

Assuming that there is indeed a compelling reason to change, the focus of competition turns to other companies like you (and in some cases, the idea that they might develop a DIY solution with their own internal resources).

During this phase, we’re not just competing on a product or solution functionality level: we’re competing on a company-to-company level - are we the sort of company they prefer to do business with (and vice versa)?

During this phase, it’s critical that we understand and shape their vision of a solution and their buying decision criteria - and that we persuade them that we represent the best available fit at both the solution and company level.

Shaping their vision of a solution turns out to be particularly critical. Forrester have shown that three-quarters of the time, the buying decision goes to the vendor that did most to shape the buyer’s vision of their future solution. If we arrive late, and if we cannot persuade the prospect to reframe their existing vision of a solution, the odds will inevitably be stacked against us.

It doesn’t matter very much how professional our proposal is: if we’re responding to a brief that has been shaped by a competitor, we are probably going to lose. But even if we do win the decision, we may not win the sale - and that’s because there’s often a third hidden competitor.

Companies never have infinite resources to invest. Projects have to compete for funding. And even if the project you get selected for has already been budgeted, there is no guarantee that they will inevitably spend the money.

Right up until the point that an irrevocable order is issued, your project could be delayed, cancelled or usurped by something that the customer sees as being of higher current importance.

That’s why you must always try and identify and understand this higher-level competition. You must understand how the customer determines investment criteria and decides which projects to approve. You need to understand where your project sits in this priority stack. And you need to work closely with your sponsor to make sure that the project ends up above the approval line rather than below it.

Being told you have been selected but that the project has been delayed might help to assuage the pain of not having the order in your hand - but more often that not, this only offers a false sense of relief. If you don’t get the project over the goal line at the first attempt, your chances of scoring off the rebound decline inexorably over time.

Losing to a completely different initiative might feel less painful than losing to a direct competitor, but it shouldn’t. If we lose at this stage, it’s often because we failed to fully qualify the project against the company’s overall sense of priority, or because we failed to make the investment case for our project stronger than those of the competing projects.

At the end of the day, losing = losing

Losing - whether to the status quo, a competitor or another project - is never nice. But if we’re aware and mindful of the entire competitive landscape, we can reduce our chances of losing. Or we can perhaps more accurately conclude that we have no real chance of winning, and invest our resources elsewhere.

Bob Apollo is a Fellow of the Association of Professional Sales and the Founder of UK-based Inflexion-Point Strategy Partners, the B2B value selling specialists. Following a successful career spanning start-ups to corporates, Bob now works with a growing client base of growth-phase tech-based businesses, empowering them to systematically establish their uniquely relevant value to their customers.