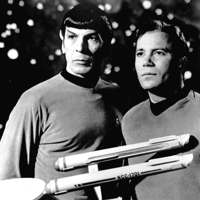 The traditional profile of a successful sales person isn’t a million light-years away from the personality of Captain James Tiberius Kirk - someone who has been variously described as “cunning, courageous and confident, and with a tendency to ignore regulations when he feels the end justifies the means”.

Apparently, the inspiration for Kirk’s character came from such diverse sources as Captain Horatio Hornblower, Shakespeare and Alexander the Great. So it’s no surprise that Kirk comes across as the all-action hero, capable of rescuing apparently fatal situations through exceptional acts of derring-do.

How to avoid vanishing up your own event horizon

But, of course, real life isn’t like the movies. And it’s often a great deal easier for most sales people to get themselves into some sort of avoidable scrape through a reckless or thoughtless act of bravado than it is for them to escape from the hole they have just dug for themselves.

That’s why, of course, the success of so many of the Star Trek story trajectories relied on the creative tension between Captain Kirk’s “take that hill” Ying and Commander Spock’s more cerebral, considered and thoughtful Yang.

In fact, it’s pretty clear that - no matter how inspired some of his individual actions - Kirk’s innate recklessness would have seen him removed from command before the end of his first tour of duty if it had not been for Spock’s restraining influence.

In a complex world of better-informed buyers today’s sales people cannot afford to rely solely on their creativity, affability and ability to build relationships. Those traditional virtues remain important, of course, but they need to be mindfully melded with a measure of dispassionate analysis.

Kirk and Spock: Ying and Yang

The truth of the matter is that we need our sales people to combine the virtues of both Kirk and Spock. We need them to be creative, persuasive and committed. But we also need them to be rational, analytic and considered in their actions.

How can we create an environment where both sets of value prevail? Well, we might usefully start by embracing the lessons learned by aviation and medicine, and create simple frameworks and checklists that help to ensure that - even in an emergency - we thoughtfully make the correct decisions.

We can help every sales person develop their creative side by coaching them in the art of inspirational, motivational story-telling and showing them how to share compelling, thought-provoking insights that serve to shape the prospect’s sense of priorities.

We can invest in sales analytics to help us identify patterns of performance and - just as important - enable sales people to rationally assess whether they are following what is likely to be a successful sales cycle and if not, to identify the support and resources they need to get back on track.

We can provide our sales people with qualification guidelines that help them to identify whether they are about to embark on a Quixotic and hopeless mission that no amount of bravado is going to enable them to emerge as a winner.

And, of course, we can look for a blend of qualities that span art, science and engineering when it comes to recruiting new hires. But one thing should be clear: the age of the sales superhero is coming to an end. In the future, we all need to be a little less Kirk and a lot more Spock.

Note: this was the concluding theme from my recent MyCustomer briefing on the subject of sales analytics. You can download the original presentation here, or follow it on SlideShare here. Live long and prosper!