Kudos to the folks at HubSpot for analysing just what makes Simon Sinek’s awe-inspiring TED Talk on “Inspiring Action” so effective. The presentation has been viewed over 12 million times - by far the most popular sales or marketing related video on TED.

I’ve shared the presentation with many of my clients and it’s proven to be a powerful catalyst for changing their thinking - often dramatically - about what they should be communicating, and how.

Whether you’re familiar with Sinek’s talk or new to his message, I strongly recommend that you invest 20 minutes of your time in watching it. It’s featured as a guest video on the Inflexion-Point website.

HubSpot’s Meghan Keaney Anderson deconstructs the remarkable technique that Sinek used to make this presentation so memorable, but I want to follow a slightly different path, and relate his message to something I see happening everyday when organisations attempt to communicate with their markets.

What you do does nothing to set you apart

The natural inclination of many technology-based organisations is to base their messages to the market around what they do. But all that typically leads to is a unimaginative stream of faster/better/cheaper claims about the superiority of their product or service.

But there are at least three problems with this approach, and they are particularly evident in considered-purchase, complex sales environments where decisions are rarely made on functionality, price or delivery:

Firstly, your communications will end up sounding just like every other vendor in the space - and let’s face it, you can’t all be faster/better/cheaper. By the way, spending a lot of money on creative troglodytes to put a finer shade of lipstick on the same boring old pig isn’t going to fool anyone important.

Which leads neatly to my second point: The only people who care about those sort of faster/better/cheaper messages are budget takers, not budget makers - so that’s who you’ll get delegated to. You’re not going to inspire anyone important in a complex, considered-purchase buying decision by continuing down that track.

And finally, when budget makers - the people with the real authority - embark on a search for a solution, they are more concerned about what’s different about your organisation and your products and services - and why they should consider you in the first place. In short, they want to learn what sets you apart.

Sinek observed many of the world’s most respected organisations and people - the ground-breakers, the true leaders, and the pioneers - and discovered a remarkably consistent pattern to their communications: they didn’t define themselves by describing what they did: they inspired their audiences by defining why they did it.

Visions are more inspiring than plans 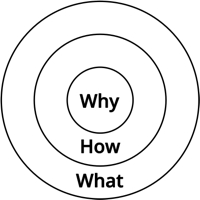 And in truth, successful sales people, and successful marketers, are no different. As Sinek points out, every single organisation and person on the planet, if called upon, can describe WHAT they do. “WHATs” are easy to identify, but the problem is that they don’t move us.

A smaller number of companies and people are capable of articulating HOW they do WHAT they do. HOWs are often used to differentiate one offering from another on the basis of approach, and having a compelling HOW is certainly a better way of standing out from the crowd. But it’s still not enough.

Very few companies or people are able to coherently explain the most important element of this triad: WHY they choose to do WHAT they do they do, WHY their company exists - and WHY should anyone care.

But of course, it’s critically important that the WHY is externally relevant to the world in which we exist and compete, and not just an internally consistent vision (or, in too many cases, hallucination) that we can relate to but about which nobody else cares.

Prospects care about the Why and How

Our prospects and customers - if they are in any way thoughtful - buy into our companies, people, products and services because of WHY we’ve chosen what to do and HOW we go about doing it resonates with them.

So here’s what I'd ask you to do: review your current marketing messages and sales conversations. If you’re like most organisations, you’ll probably find that “what” messages predominate, with some “hows” and fewer “whys”.

Now here’s the challenge: what would it take to rebalance your messages and conversations so that your organisation paid the proper attention to the critical WHY > HOW > WHAT sequence through which you can truly inspire your audience?

If you come to the conclusion, after watching the video, that maybe you could do better, please drop me a line. I’d be happy to share some experiences that I think might be very relevant.